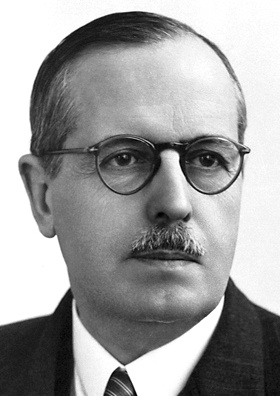 (1887 - 1971)
The Nobel Prize in Physiology or Medicine 1947 was divided, one half jointly to Carl Ferdinand Cori and Gerty Theresa Cori, née Radnitz for their discovery of the course of the catalytic conversion of glycogen and the other half to Bernardo Alberto Houssay for his discovery of the part played by the hormone of the anterior pituitary lobe in the metabolism of sugar.
http://www.nasonline.org/member-directory/deceased-members/20001310.html
Bernardo Alberto Houssay was born in Buenos Aires, Argentina, on April 10, 1887, one of the eight children of Dr. Albert and Clara (née Laffont) Houssay, who had come to Argentina from France. His father was a barrister. His early education was at a private school, the Colegio Británico. He then entered the School of Pharmacy of the University of Buenos Aires at the exceptionally early age of 14, graduating in 1904. He had already begun studying medicine and, in 1907, before completing his studies, he took up a post in the Department of Physiology. He began here his research on the hypophysis which resulted in his M.D.-thesis (1911), a thesis which earned him a University prize.

In 1910 he was appointed Professor of Physiology in the University's School of Veterinary Medicine. During this time he had been doing hospital practice and, in 1913, became Chief Physician at the Alvear Hospital. In addition to this he was also in charge of the Laboratory of Experimental Physiology and Pathology in the National Department of Hygiene from 1915 to 1919. In 1919 he became Professor of Physiology in the Medical School at Buenos Aires University. He also organized the Institute of Physiology at the Medical School, making it a centre with an international reputation. He remained Professor and Director of the Institute until 1943. In this year the Government then in power deprived him of his post, as a result of his voicing his opinion that there should be effective democracy in the country. Although receiving many invitations from abroad, he continued his work in an institute which he organized with the support of funds contributed by the Sauberan Foundation and other bodies. This was the Instituto de Biología y Medicina Experimental, where he still remains as Director. In 1955 a new Government reinstated him in the University.

He has worked in almost every field of physiology, having a special interest in the endocrine glands. He has made a lifelong study of the hypophysis and his most important discovery concerns the role of the anterior lobe of the hypophysis in carbohydrate metabolism and the onset of diabetes. He has worked on many other topics in physiology and pharmacology, including the physiology of circulation and respiration, the processes of immunity, the nervous system, digestion, and snake and spider venoms.

Apart from his research, he has been active in promoting the advancement of university and medical education, and of scientific research, in Argentina.

Dr. Houssay is the author of over 500 papers and of several books. He has won many prizes ranging in time from that of the National Academy of Sciences, Buenos Aires, in 1923, to the Dale Medal of the Society of Endocrinology (London) in 1960.

He holds honorary degrees of twenty-five universities and is a member of the Argentine National Academy of Medicine, the Academy of Letters, the National Academy of Sciences of Buenos Aires, the Academy of Moral and Political Sciences of Buenos Aires, and of the Pontifical Academy of Sciences. He is honorary professor of 15 universities, foreign associate of 11 academies or learned societies, member (honorary or correspondent) of 38 Academies, 16 Societies of Biology, 11 of Endocrinology, 7 of Physiology and 5 of Cardiology. He has been decorated by the governments of several countries.

He married Dr. Maria Angelica Catan, a chemist, who died in 1962. They have three sons, Alberto, Hector, and Raul.

This autobiography/biography was written at the time of the award and first published in the book series Les Prix Nobel. It was later edited and republished in Nobel Lectures. To cite this document, always state the source as shown above.
(Show less)