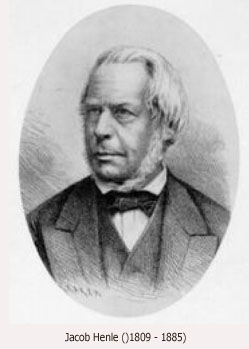 After studying medicine at Heidelberg and at Bonn, where he took his doctor's degree in 1832, he became prosector in anatomy to Johannes Müller at Berlin. During the six years he spent in that position he published a large amount of work, including three anatomical monographs on new species of animals, and papers on the structure of the lymphatic system, the distribution of epithelium in the human body, the structure and development of the hair, the formation of mucus and pus, etc.

In 1840 he accepted the chair of anatomy at Zürich, and in 1844 he was called to Heidelberg, where he taught not only anatomy, but physiology and pathology. About this period he was engaged on his complete system of general anatomy, which formed the sixth volume of the new edition of Samuel Thomas von Sömmering's treatise, published at Leipzig between 1841 and 1844. While at Heidelberg he published a zoological monograph on the sharks and rays, in conjunction with his master Müller, and in 1846 his famous Manual of Rational Pathology began to appear; this marked the beginning of a new era in pathological study, since in it physiology and pathology were treated, in Henle's own words, as branches of one science, and the facts of disease were systematically considered with reference to their physiological relations.

In 1852 he moved to Göttingen, whence he issued three years later the first instalment of his great Handbook of Systematic Human Anatomy, the last volume of which was, not published till 1873. This work was perhaps the most complete and comprehensive of its kind that had so far appeared, and it was remarkable not only for the fullness and minuteness of the anatomical descriptions, but also for the number and excellence of the illustrations with which they were elucidated minute anatomy of the blood vessels, serous membranes, kidney eye, nails, central nervous system, etc. He discovered the loop of Henle and Henle's tubules, two anatomical structures in the kidney.

Other anatomical and pathological findings associated with his name are:

Henle developed the concepts of contagium vivum and contagium animatum, respectively (Von den Miasmen und Kontagien (1840)) - thereby following ideas of Girolamo Fracastoro (1478-1553) and the work of Agostino Bassi (1773-1856); thus co-founding the theory of microorganisms as the cause of infective diseases. He did not find a special species of bacteria himself - this was achieved by his student Robert Koch. Those two put up the fundamental rules of cleanly defining disease-causing microbes: the Henle Koch postulates.

He died at Göttingen.